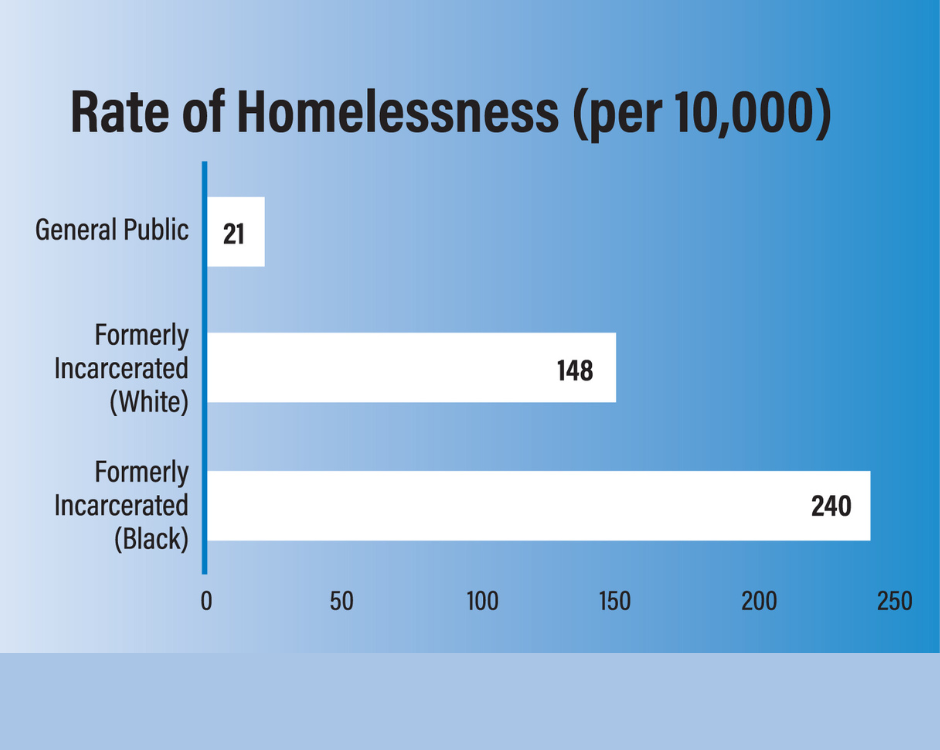 Racial discrimination in the American justice system is nothing new. For centuries, Black Americans have faced an ideology that placed whiteness at the top and them at the bottom of a racial hierarchy, with unequal treatment under the law among its manifestations. According to the Equal Justice Initiative, Black people in America experience more unfair sentences, wrongful convictions, and greater police violence when compared with other racial groups. The effects of this imbalance spread beyond interactions with the justice system alone, including into housing.

"The criminal justice system is extremely racially biased," explained Alan Mills, Executive Director of the Uptown People's Law Center. "And therefore, the people who are impacted by having criminal records are also going to be majority minority. So, you're not only discriminated against because of the color of your skin but then, because of your criminal record, no matter how old it is, it becomes virtually impossible for you to find housing."

This article, which centers on the justice system's role in the disproportionate rate of homelessness among Black Americans, is the third in our series examining the intersection of race and homelessness. The series is a small part of the agency's striving to become an anti-racist organization.

According to a 2019 report from Housing Action Illinois, Black Illinoisians are approximately eight times as likely to experience homelessness as their white peers. Local governments often treat survival behaviors such as sleeping on streets, in cars, or in abandoned buildings, panhandling, loitering, and public urination as illegal activity. Many individuals facing homelessness also battle mental health challenges and addiction, factors which are further criminalized.

Interactions with law enforcement are frequent, and many of those experiencing homelessness face fines, fees, misdemeanors, and even incarceration for actions unavoidable in their circumstances. The disproportionate number of unhoused Black individuals coupled with racial bias within the justice system means that those of this racial group are far more likely to face punishment for such survival crimes.

Cash Bail and the Cycle of Poverty:

In theory, the bail system is intended to increase the likelihood that defendants will appear in court. To be released from custody while awaiting trial in most states, defendants pay bail, a sum of money determined by the judge. The money is returned to the defendant when their trial is complete.

But racial bias may come into play in the bail amounts judges set, and defendants with little or no means to pay risk loss of employment, housing, and more if they remain in custody. In many states, to get bail funds, detained individuals may solicit money from bail bond companies who charge fees or interest. Or they could plead guilty, even if innocent, in order to be released. If they do so, however, they will likely face new roadblocks caused by the mark on their record.

Any choice could have serious economic consequences, raising an individual's likelihood of homelessness and/or impoverishment.

Those who are affected by the criminal legal system do not see punishment end when their sentence is complete. And because racial bias leads to Black Americans being disproportionately affected, they suffer its lingering effects at higher rates too.

Many can expect to face denials for employment and housing, as well as limitations on further educational opportunities because of their records. In some states, those with felony drug convictions lose eligibility for public benefits for food and cash assistance, regardless of financial need.

"Society as a whole still thinks that people with criminal records are in some sense evil or bad, or that people in prison are somehow different than the rest of us," said Mills. "And when you have a prison system full of Black people, this reinforces our cultural nerve – that somehow the problem here is Black people, not our criminal justice system or our economic system."

Income prospects on reentry into society are dim. According to the Brookings Institute, over 50% of formerly incarcerated individuals fail to find stable employment within a year of their release. Without regular income, it's challenging – if not impossible – for many to keep a roof over their heads.

In fact, a 2018 report from the Prison Policy Institute found the rate of homelessness of formerly imprisoned people to be 10 times that of the general public, further clarifying why the number of Black individuals facing homelessness is much higher when compared with white people.

But the tides seem to be changing. New policy initiatives are making headway in supporting those with criminal records in need of housing.

Cook County passed the Just Housing Amendment in 2019, which stipulates that landlords cannot discriminate against those with criminal records from more than three years prior to their application with a few exceptions.

"The process requires an individualized assessment as to whether or not there's an actual danger to the people either in the building, the other tenants, or the landlord, caused by the alleged or convicted criminal activity of the applicant," said Mills. "So, you can't just have a blanket policy if you're excluding people, it has to be an individualized assessment for each tenant who applies."

The Department of Housing and Urban Development is considering adopting a similar measure banning discrimination against those with criminal records nationwide. "The fact that we're saying it's illegal to discriminate against them just because they have criminal records would be a remarkable change," Mills continued.

Though the city and nation have a long way to go before breaking the link between homelessness, race, and the justice system for Black Americans, there is some momentum building to effect positive change.

If you are an Illinois resident facing housing discrimination due to a criminal record, please consider contacting the Uptown People's Law Center at This email address is being protected from spambots. You need JavaScript enabled to view it..

Want to read more stories like this? Be sure to join our email community!