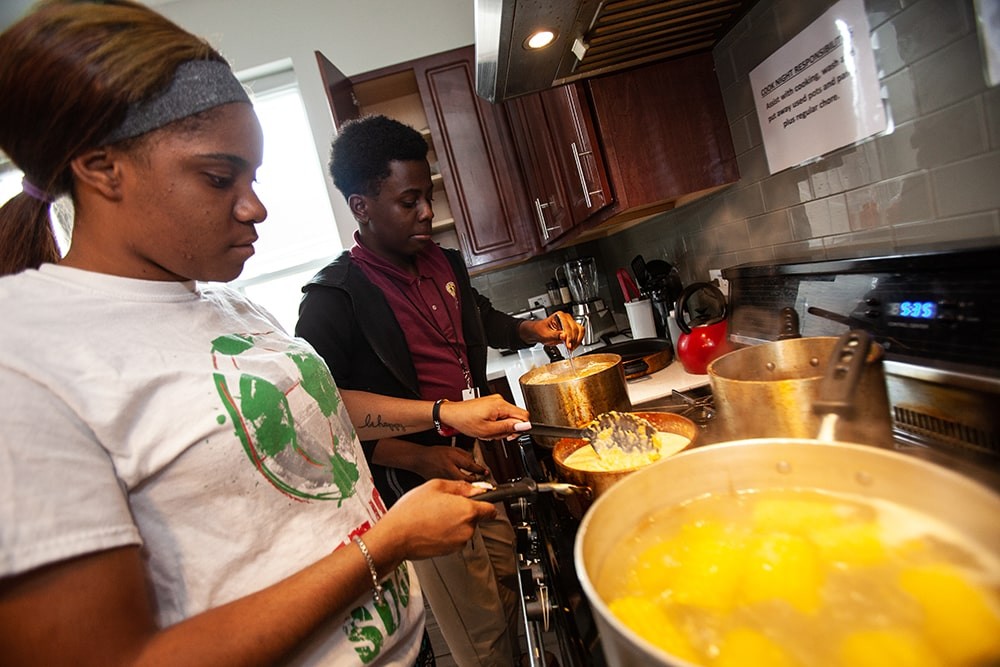 It's been a year of milestones at Phoenix Hall, capped off by six of the program's residents graduating from high school.

Located in Chicago's West Lawndale neighborhood, Phoenix Hall is The Night Ministry's residence for high schoolers experiencing housing instability. It's named after the mascot of North Lawndale College Prep High School, which, along with Old St. Pat's Church, helped launch the program in August of 2017.

When it first opened, Phoenix Hall was one of the first housing programs in the country for students from a specific high school. Over the last year and a half, the program has expanded its mission to serve students from other Chicago high schools.

"We were finding that the need for supportive housing for students was as prevalent in the wider community as it was inside North Lawndale College Prep," said Allison McCann-Stevenson, Assistant Director of Long Term Residential Services at The Night Ministry.

Welcoming students from other area high schools is not the only change at Phoenix Hall. McCann-Stevenson said she and her colleagues at The Night Ministry have reframed the way they talk about the program to potential residents and their families.

"We learned from our outreach efforts that many young people who would be eligible to stay at Phoenix Hall didn't see themselves as homeless. They viewed homelessness as living in a car or on the street, whereas they might be staying temporarily with relatives or friends. So we had to adapt how we present the program to show people that there is a benefit to staying here," she said.

"I like to define Phoenix Hall as a housing alternative for students whose family or current living situation presents challenges that affect their educational goals, their attendance at schools, and their focus on their studies."

Phoenix Hall staff members work closely with both residents and their parents or guardians, with an end goal of resolving challenges that families may be facing and reunification, if possible.

"We aren't taking over the role of the parent. We are assisting and helping students complete their high school education," said Program Manager Lori Herrera.

"We want to make sure that the family doesn't view us as adversaries, that they don't believe we are judging their situation," said McCann-Stevenson, "because parental engagement is a cornerstone of the work that we do with young people at Phoenix Hall."

Herrera said Phoenix Hall feels very much like a home for the residents.

"The residents bonded quickly this year. They eat dinner together. They'll play board games or help each other with their homework," she said. "It's really an inviting environment."

Devontay, a high school junior who came to Phoenix Hall in February, agrees. "It's a nice safe haven," he said.

Phoenix Hall has helped Devontay concentrate on his school work.

"When I was staying with a friend, it was hard to study because it was so noisy," he said.

As the graduates begin a new chapter in their lives, McCann-Stevenson said the program is committed to making sure they make a successful transition.

"Whether a young person goes off to college, goes to junior college, or goes to vocational training, we need to make sure that they not only make it to that stage but also through it," she said.