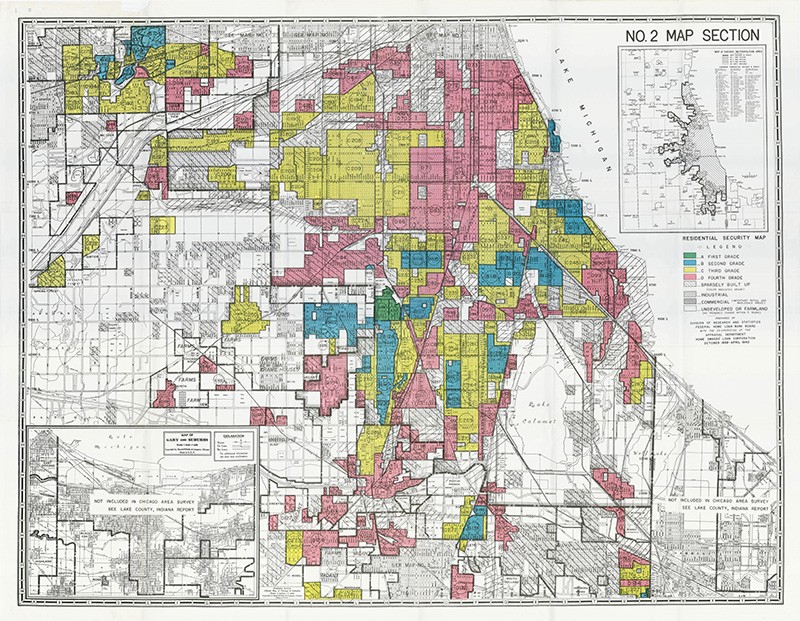 A color-coded map issued by the federal government in 1940 showing the southern portion of the metro Chicago area. Neighborhoods in red, where African Americans lived, were deemed too risky for investment.

As The Night Ministry continues its series of articles exploring the intersection between race and homelessness, we delve into a theme that weaves through more than a century of national and local history: how systemic housing discrimination has contributed to disproportionate numbers of Black Americans among those experiencing poverty and homelessness.

"When you think about housing as being a pathway to economic mobility and opportunity—for far too many people in this country it's been a pathway that's been full of roadblocks," said Renee Willis, Senior Vice President for Racial Equity, Diversity, and Inclusion at the National Low Income Housing Coalition.

This article highlights three efforts in modern history to segregate Black populations, discourage investment in their neighborhoods, and restrict their ability to build generational wealth. From roadblocks like these run a direct line to today's housing and wealth imbalances.

One such effort began in the early 20th century, as many Black Americans fled the Deep South to escape the racialized violence and discrimination of Jim Crow in a movement known as the Great Migration. They headed north, pursuing a better life in cities like Chicago. Yet, the response they received on arrival was far from warm.

Intent on preventing them from settling in their neighborhoods, many white communities, including in Chicago, adopted racially restrictive covenants, enforceable agreements preventing people of specified ethnic or racial groups from purchasing, leasing, or occupying local properties. As a result, Black Americans were barred from residing in much of the city.

Though racially restrictive covenants were finally outlawed in 1968, they were only one of many systemic discriminatory practices in housing.

The 1930s marked the beginning of one such practice, with the creation of the Federal Housing Administration (FHA), an agency designed to provide mortgage insurance to approved lenders to make it easier for Americans to purchase homes. In reality, the FHA's benefits were restricted by race.

To determine which areas would be considered for insured mortgages and investment opportunities, the FHA created color-coded maps centered on the racial makeup of neighborhoods. White neighborhoods lacking immigrant populations were marked green and neighborhoods with even small Black populations, regardless of their class, were highlighted red.

Red areas were not only cut off from the FHA's benefits, they became increasingly segregated as the remaining white residents left, including in Chicago. "Black people were concentrated into the 'Black Belt,' in what is now Grand Boulevard, Douglass Park, and Washington Park," said Doug Schenkelberg, Executive Director of the Chicago Coalition for the Homeless.

As white areas of the city enjoyed the benefits of green status like increased opportunities for home ownership and for building foundations for generational wealth, Black neighborhoods faced active disinvestment and severely limited options to purchase property.

By mid-century, many Black homebuyers were limited to purchasing property through exploitative contracts, as mortgages were largely unavailable to them thanks to the effects of redlining.

Real estate speculators purchased local homes at low cost from white buyers fearing the entrance of Black families into their communities. Speculators then offered the homes to Black buyers at double or triple the cost, knowing they had few, if any, other options.

Buyers were offered these homes on contract, a type of housing agreement in which the seller kept the property's deed until the home was fully paid. Though the buyer paid installments like in a mortgage, they did not build equity. If a buyer missed a payment, they risked eviction and the loss of their entire investment. Such arrangements were prevalent in largely Black neighborhoods in Chicago.

The legacy of such policies lives on. During the subprime mortgage crisis of 2000s, mortgages became available to those who could previously not qualify for them—but they came with high interest rates.Because many local residents in formerly redlined areas had low credit scores, they were targeted. When the market crashed, many lost their homes.

The subprime mortgage crisis is just one example of many efforts that have exacerbated existing inequalities. Decades upon decades of housing discrimination, disinvestment, exploitation, and segregation have inevitably led to the disproportionate number of Black Americans among America's—and Chicago's—homeless and poor. But it doesn't have to remain this way.

Willis believes the country must alter its fundamental beliefs about race and that government must look to those most affected by racist policies for solutions.

"In order to deal with systemic racism, it's going to take everybody—a collective. It's about changing what we value as a society and people working together to address this huge issue," Willis continued. "We have to shift our perceptions so that people of color are seen as human beings with an equitable opportunity for housing and wealth."

But it doesn't stop at changing minds. Those in power need to collaborate with those affected by racist policies and practices. "It's so important that community, city, and local-level governments are working alongside communities. It really is involving the folks who are closest to the problems as the architects of the solution," said Willis.

Groups like the Government Alliance on Race and Equity (GARE), she believes, are helping enact this change from the ground up. GARE works with city governments, offering resources and tools to illuminate and address how their policies and practices affect marginalized groups. They work to form an action plan focused on outcome. "It's not just one city, it's multiple cities across the county that are really doing this deep dive into racial equity," Willis explained. "Hopefully then, in totality, it becomes this whole national shift and dialogue around racial equity and doing the work."