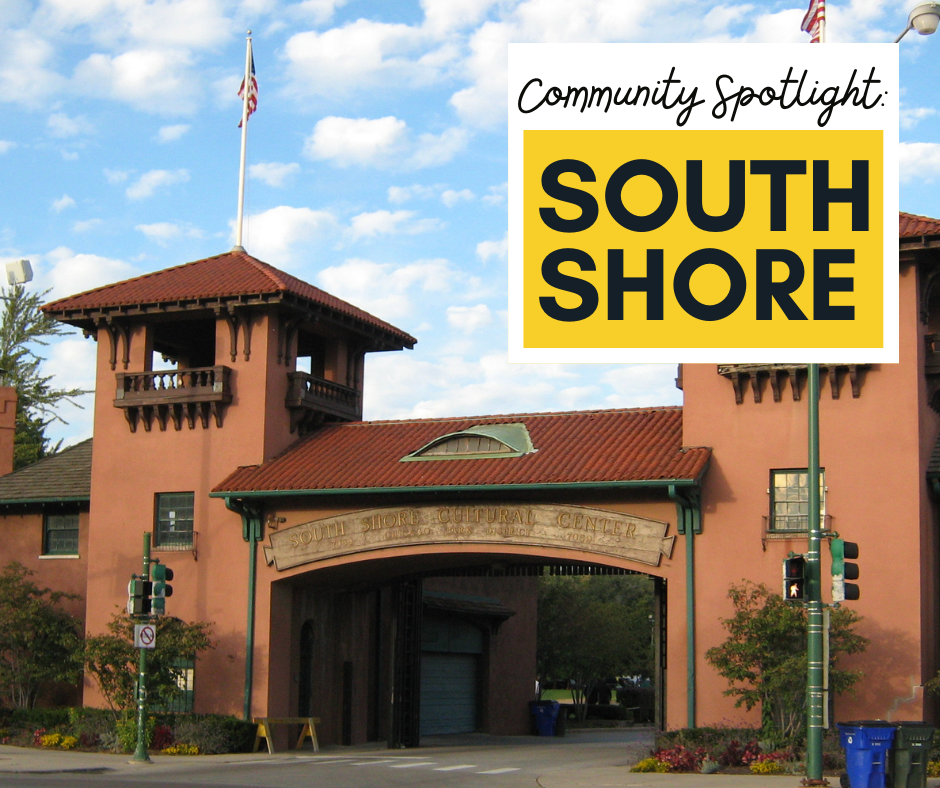 The South Shore Cultural Center is an important landmark in this South Side neighborhood.

In the second installment of our series spotlighting neighborhoods we're active in across the city, South Shore takes centerstage.

Located on Chicago's South Side along Lake Michigan, the community boasts natural beauty and plenty of assets including beachfront property, civic engagement, and architectural gems like the South Shore Cultural Center. So it may seem surprising that The Night Ministry's Health Outreach Bus takes its services there every week offering free health care, food, and support to residents experiencing homelessness and poverty.

Though many South Shore residents are well-off, 33% of its residents live in poverty, according to 2019 data from the Heartland Alliance. Taken as a whole, the city has an 18.4% poverty rate.

"Who ever heard of a community that's poor that's got three beaches, three yacht clubs, and two golf courses? It's an anomaly," said Dr. Carol Adams, Board Vice-Chairperson of South Shore Works, a nonprofit composed of numerous local organizations that's committed to revitalizing and restoring the South Shore community.

To get a better understanding of South Shore's complexity, we'll dive into its past and present.

In the 1960s, a then-largely white South Shore began to attract more and more Black families and individuals. As their numbers increased, white residents left. Many feared that more Black residents would lead to a drop in property values. "South Shore was going through what I call the 'Changing Neighborhood Syndrome,'" said Adams, who moved to the area as a University of Chicago graduate student in 1968 and stayed. "This is something that happens in general when a neighborhood starts to change and the people in it feel like they can't live among Black people."

Alisa Starks, owner of Inner City Entertainment and a member of South Shore Works' leadership team, moved to the area as a young girl in the 1960s and saw the same. "When you look at my kindergarten picture, there's mostly white children, with maybe three or four Black children. But by the time I was in the 8th grade, it was all African American except for maybe one or two."

As white families moved away, they took their businesses with them. "It happens often when neighborhoods change—the institutions go after them, because their constituents, they feel, are no longer present," said Adams. "They had some very upscale stores when I moved here in this neighborhood, some specialty stores in the community. And now we have a lot of vacancies."

In South Shore, one of the institutions that attempted to leave was South Shore Bank, but residents fought back. At the time, banks needed to petition the state to allow them to move from an area. Community members protested with verve.

The owners of nearby Hyde Park Bank bought the property and brought an engaged and innovative perspective that positively impacted South Shore. Adams, who worked on research and planning in South Shore Bank's Neighborhood Institute, shared, "It was the country's first neighborhood development bank. They got money from all kinds of investors who were non-traditional."

The institution included a housing center, a minority business investment center, and more. "South Shore Bank became a model for neighborhood development banking all over the US. It was huge because it provided loans for the community, for businesses, for homeowners," she continued.

Though the bank has since been replaced by chains, another iconic neighborhood institution remains: the South Shore Cultural Center, formerly the South Shore Country Club, a spacious property that has since hosted the wedding of President Barack Obama and wedding reception of former Chicago Mayor Rahm Emanuel. But the space was not open to everyone. Entrance was barred to those of certain racial, ethnic, and religious identities.

"When I first moved in, we weren't allowed to go," said Starks. "Jewish people and Black people were not allowed to become members or attend. It was a different place."

Due to the departure of white residents from the neighborhood, the club's upper management planned to demolish the property. But Hyde Park and South Shore residents worked together to keep it and change it into a cultural center. Their plan worked.

"We began to have events there even before they took down the sign that said, 'For Members Only,'" said Adams. "We started organizing concerts and activities. It's a beautiful and central part of the community."

The victories were hard fought and hard won, but South Shore faced more challenges ahead. Around the millennium, the City of Chicago demolished local public housing projects and scattered displaced residents across Chicagoland, sending the largest numbers to Black communities, and especially to South Shore. "They put people in neighborhoods without any social support who came from neighborhoods that had a lot of it," said Adams. "South Shore has always had very few social agencies – still now very few."

The influx of low-income residents, many of whom were on Section-8, a Federal program that helps low-income families afford housing, increased the percentage of renters in the neighborhood. As many developers from outside the community bought up property for this rental market, low-income renters became concentrated in specific blocks, a practice that increased economic segregation in South Shore.

"We now have only 30% of the housing stock in South Shore that's being owner occupied. That's the lowest ever," Adams shared. And the maintenance levels of properties with absentee owners often drop, she said. "It changes the vibe. Things start operating differently. A building that used to have a high level of maintenance all of the sudden is not getting maintenance anymore."

Vacancy rates are high in the neighborhood too, but not because of a lack of interest in local properties. Adams says speculators often purchase buildings they don't plan to rent out yet, biding their time until property values rise when they can then charge higher rents or sell at a generous profit. With The Barack Obama Presidential Center moving into nearby Jackson Park, many are anticipating big returns. "They may have a for rent sign in the window, but when you try to contact somebody to rent it, it's a different story," she said.

But residents have taken matters into their own hands. South Shore Works' community organizers are working to increase homeownership, including among those who are on Section-8, by focusing on first time buyers. Adams says they hope to increase owner-occupied properties in South Shore to 50%.

"Most people don't know this, but you can use a Section 8 certificate to pay down a mortgage, it doesn't just have to be used for rent. We want to teach people how to do it and we want to make down payment money available. Often what it takes to get people into homeownership people don't have, but they do have what it takes to sustain it," Adams continued.

"The first step toward wealth accumulation for many people is their home. If we can provide some down payment money, some counseling, and some assistance on how to get into first time home buyer programs, that would be very significant," she said. But South Shore Works strives to impact change for the community across the board, not only to increase home ownership numbers and business opportunities for locals. With new funding starting to come in from the City of Chicago, things are looking up, though it will still be a hard road ahead.

"There's been decades of disinvestment, racial inequality that has negatively impacted this community," Starks said. "Funding is being targeted to South Shore and other areas of the city intentionally to correct some of those ills. We know as a community what we want to see, so let's make it happen."

"We're just finishing our quality-of-life plan that lays out strategies. We're being very intentional about what we want to see, we're very engaged and vocal, and we're working together around it," added Adams. "We're really looking to try to create new homeowners and try to address the issues of wealth creation, entrepreneurship, things like that. Not try to have a poverty narrative but to try to reverse it."

The vision for South Shore includes investment in arts, culture, entertainment, cuisine, and local, shared, and minority property ownership. Starks, whose new multi-EATertainment development will be located in the 71st St. corridor, the heart of South Shore's business district, is already seeing the seeds of change. "Little things have started to pop up—bakeries and coffee shops—but the big wave is still yet to come."

"As we fill up these corridors with things that people want, the community will come out. It's a beautiful place. We have everything—the water, the beaches, the parks, and a lot of great history. It's going to be wonderful to see the change," she said.

To read our Community Spotlight on North Lawndale, visit https://www.thenightministry.org/blog/community-spotlight-north-lawndale.