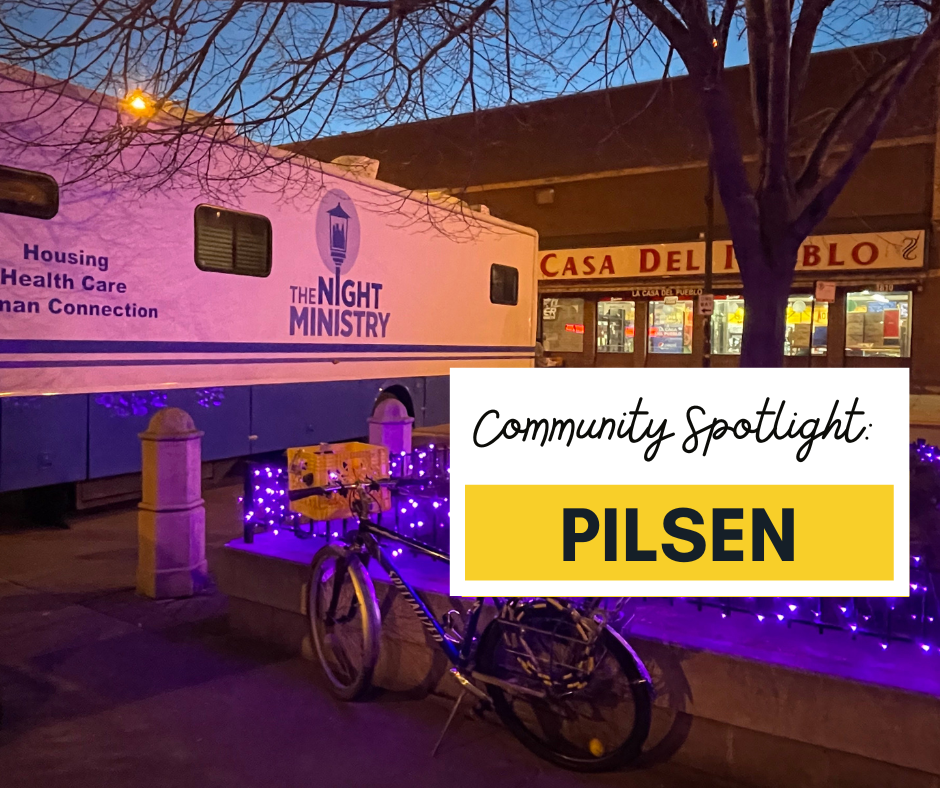 The Night Ministry's Health Outreach Bus stops in Pilsen, where staff and volunteers offer resources like free food and medical care to locals who are unhoused or facing poverty.

The Lower West Side neighborhood of Pilsen has long been a hub of Mexican and Latino culture in Chicago. Today it's also well-known for its restaurants, historic buildings, and vibrant arts scene.

Yet, many of its residents struggle with homelessness and poverty. The Night Ministry's Health Outreach Bus stops in Pilsen twice a week, offering them free health care, food, supportive services like connections to housing, and hospitality from staff and volunteers.

In this article, the fourth in our series spotlighting neighborhoods we provide services in across the city, we'll share what makes Pilsen such an important part of Chicago as well as some of the major concerns facing its residents today.

Pilsen has long been a community of immigrants. Early residents were mainly German and Irish, followed by Czechs, who named the neighborhood after the Bohemian city of Plzen.[1] The Czechs made a major impact on the area's appearance and organization. Much of its current architecture and dense urban planning traces back to these Central European immigrants.[2]

By the 1960s, Pilsen was attracting increasing numbers of Mexican immigrants, many of whom had been displaced from their neighborhoods by highway construction and the city's urban renewal projects. Soon they became Pilsen's largest ethnic community. According to a report by researchers John J. Betancur and Youngjun Kim of the University of Illinois Chicago, the area's demographic change from majority white to majority Latino led to the city classifying the area as one of 'slum and blight,'[3] a term signifying that the living spaces in the community were "detrimental to safety, health, or morals."[4] Such a classification led to community disinvestment, among other negative outcomes for residents.

Despite the challenges they've faced, Pilsen's Mexican and Latino community has had a remarkable impact on the neighborhood throughout the decades. One example is the Benito Juarez Community Academy, a striking building by Mexican architect Pedro Ramírez Vázquez, known for designing Mexico City's renowned Museo Nacional de Antropología.[5]

The academy owes its existence to protests and community activism in the late 1960s and early 1970s, led in large part by female activists. Before the academy's construction, public school students from Pilsen were sent to study in neighboring South Lawndale and were not offered bilingual education, though many were recent immigrants. Activists fought for a local school that could fairly serve the young people and won. The academy is a result of their persistent efforts, and it remains a central pillar of the community today.[6]

But things have been changing too, with increases in gentrification starting in the 1990s. According to WTTW, between 2000 and 2010, the neighborhood saw a 26% drop in Latino residents as Pilsen began to draw in more non-Hispanic white and higher income households, and many long-time residents were priced out.[7] Gentrification has contributed not just to changing demographics, but to increases in outside investment, changes in police interactions, and higher housing prices.

"It's not just people getting displaced that's concerning, but also this idea that now there's going to be resources because a certain demographic of people are moving in, whereas in the past, resources weren't allocated that way," said Marko Flores, Engagement Specialist for the 590 Crisis Care Team at the Pilsen Wellness Center, a group that provides mental health de-escalation and community-based resources to decrease reliance on hospitalization or police intervention for those in crisis. "In the late 2000s and early 2010s, you would see a different type of police presence, a different type of infrastructure being implemented in the neighborhood, as opposed to the past, where things would either be allowed to fall apart or people were just left to their own resources."

"Pilsen is still struggling with many challenges. Affordable housing is hard to find here," said Lucia Moya, Chief of Staff for Alderman Byron Sigcho-Lopez, who represents the 25th Ward, of which Pilsen is a part. It can be especially difficult to encounter affordable housing for much of the neighborhood's Latino population, Moya explained, because many live with family and need larger units. As a result, some have been forced to leave, have lost their homes, or are struggling to cover expenses.

Despite it all, Latinos continue to maintain a powerful presence in the area. In fact, the Lower West Side, which includes the neighborhoods Pilsen and Heart of Chicago, was 68% Hispanic in the years 2016- 2020, according to the Chicago Metropolitan Agency for Planning.[8] And they are still fighting for their needs to be met and their voices heard.

"You see those folks who've been living here for a lifetime coming together. There's a very strong connection with Pilsen being a home to many Latino and Mexican families, and I think there's a sense of community around protecting and preserving that," said Tess Callaghan Vanek, Mental Health Professional and 590 Team Lead with the 590 Crisis Team.

Flores, who grew up in Pilsen, has seen it firsthand. "Especially during the pandemic and the George Floyd protests, there was a huge resurgence of activist groups and community members getting together to bring awareness to certain things, whether it's gentrification, police presence, or the needs of the community," he said.

Moya sees activism expanding well beyond the neighborhood. "The community is putting pressure on elected officials at the city and county level. We're putting attention on housing affordability and organizing around services like access to medical care," she said. And much of the activism in the neighborhood today, she shared, has its roots in the community work done in the 1960s and 1970s.

Pilsen's long and ongoing history of activism is just one aspect of its unique character. Its rich expression of residents' heritage and spirit also continues to set it apart.

"What makes Pilsen a special place is exactly what's bringing the gentrification," said Flores. "It's a hardworking, artistic, expressive, unique neighborhood with its own culture. And it's always been open to other cultures. There's no part of this neighborhood that's closed off to anybody."

With its streets decorated with murals celebrating Mexican and Latino culture, its corners filled with the aroma of that heritage, and much more, it's no wonder Pilsen continues to be one of Chicago's great neighborhoods.